STEVE HAS FINISHED HIS RIDE!!!!!! Son Ben, with great grandson Chip, grandson Elijah, granddaughter Briana, Steve, grandson Jacob, DIL Alison, granddaughter Alyssa and Allane celebrate at Brackett's Landing Steve dips his tires as Ben narrates for the Zoom participants and Brian Soergel, the editor of the Edmonds Beacon newspaper, gets the story. Like 67 other mornings this summer, Steve woke up and got ready to ride.  It was not a long ride, but it certainly was a momentous one.  I actually left before Steve for the first time, intent of finding my way to Brackett's Landing in Edmonds and ensuring a parking spot.  It is indeed a busy place for walkers, beachgoers, Tai Chi practicers, and scuba divers.   When the wildfires west of Winthrop forced us to find an alternate route through the Cascades, Steve elected to come through Stevens Pass along Rt 2.  We needed to find a place (originally supposed to be Anacortes) where he could dip his tires into the waters on this western si
5 comments
Read more 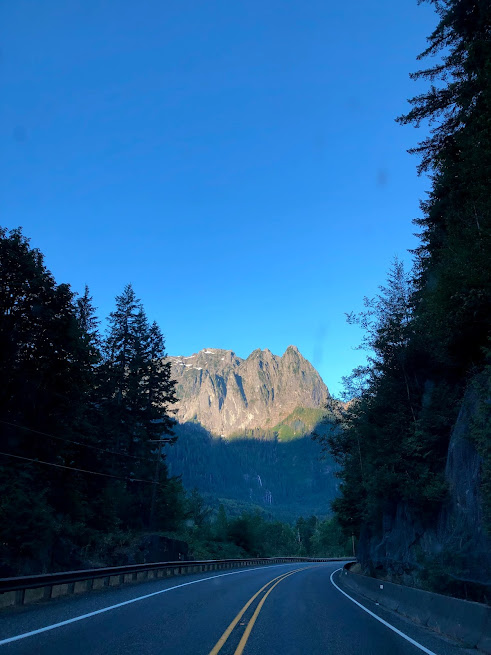 Leaving Skykomish early at 6:00am we had the sun coming up behind us, but we were still in the mountains enough to have plenty of shadow.  Still snow in them thar hills.   This route was level enough to keep me happy and at ease driving, but there were enough bridges and tunnels and curves with no shoulder to keep Steve on edge.  (Did you see what I did there?) Steve got a better view, but his phone had condensation from the morning chill. I was greeted in Snohomish by hot air balloons, and a pair of crows.   On either fence post.  They swooped in and landed at the same time and watched me. Steve was finished his ride by 9:30.  No wind.  Nice temps.  We had a delicious breakfast at Jake's Cafe. Way early, we visited a park and then a coffee shop until we could get into our room at The Inn at Snohomish.  This is a busy and fast-paced little town.  It seems strange to be in towns again, after all the space of the mountains and prairies. We ate dinner at Trails End Taphouse.  Thought
1 comment
Read more 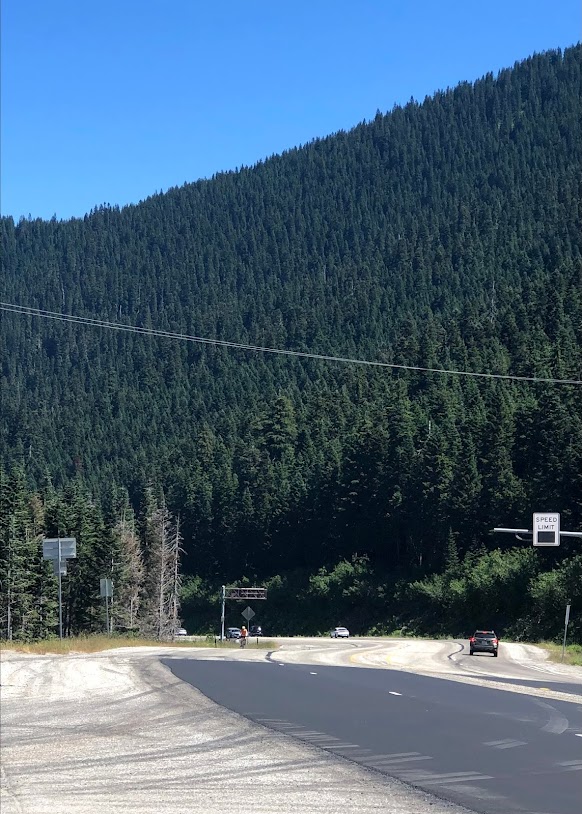 The Enzian Inn in Leavenworth was above average in all respects.  When Steve learned that they offered breakfast, he signed up for the 7:30 seating and decided to sleep in.  Since he has not had a down day, this turned out to be a great idea.  He got a good night's sleep and filled up on a delicious breakfast.  They had an omelette station as well as fruit, meat, cinnamon rolls, pastries, muesli, and special yeast waffles with an amazing berry sauce.   He was off at 8:10am  for the last challenging mountain pass climb of the ride.  Stevens Pass was an elevation gain of 3,331 feet.  He stopped at the rest area after about 17 mies.  After that, he just climbed.   I was waiting for him at the top of the pass when he came riding up at about 12:40.   Finally reaching the peak! The ski area was all closed up, but there were a lot of day hikers all throughout the mountains.  Steve had a little lunch of tortilla, salami and cheese.  We sat near some jubilant Pacific Crest Trail hikers.
2 comments
Read more 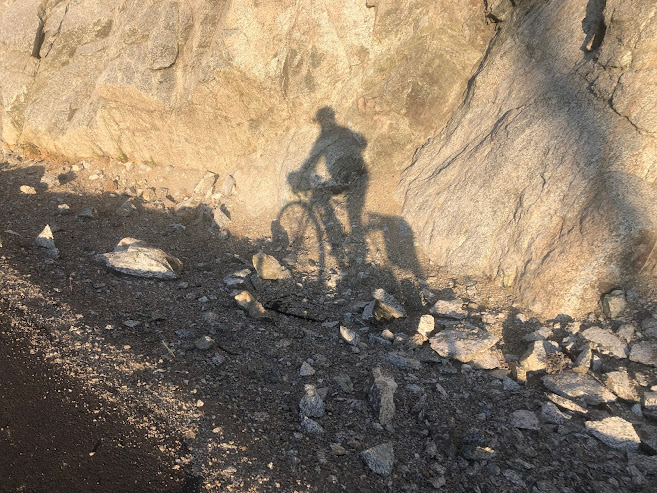 Chelan Lake was calm and quiet as Steve headed up and out of town.   He disturbed a few antelope on the slopes. No paragliders this early, but this is the type of mountain they jump off. We met in Cashmere at Weed's Cafe.  The wind has troubled today, and this first stop was after 40 miles, so Steve was tired and hungry.  Only 12 more miles to Leavenworth, though.  Too early for the hotel check-in, but the registration desk ladies were very sweet and had Steve bring in his bike and relax in the cool lobby with ice water to drink. I wandered around the town, which was very like a Bavarian village. And very full of tourists. Had a delicious tasting at the Hard Row to Hoe winery. Rested and hungry, Steve and I dined at Andreas Keller Restaurant and had a very authentic schnitzel. The Whistlepunk Ice Cream Company provided a very nice dessert. This one was  the "two-scoop!" I expect that this is where we are headed tomorrow....
2 comments
Read more

Pyrocumulous clouds I learned about these clouds on NPR yesterday, and Hank pointed them out from the parking lot.  When a forest fire burns, superheated air over the fire rises. The moisture it contains condenses into droplets and creates the "fire clouds."  Unfortunately, they are thunderheads but the dry air below causes the rain to evaporate before it can reach the ground.  So the result can be dry lightning, and possibly start more fires!    Morning sky over the Colville Indian Reservation.  Just the sun rising.   Steve left around 6 am, following Old Rt 97.  The Okanogan River winds beautifully along.  Still hazy and the smoke is visible to the north. Steve found it necessary to pull his neckerchief up over his mouth and nose for several hours. I was enjoying the scenery when I happened to look to my right and did a double take.  Along the top of the mountains there was an ENORMOUS array of what looks like satellite dishes.  I stopped to take a picture, but the smoke wa
2 comments
Read more 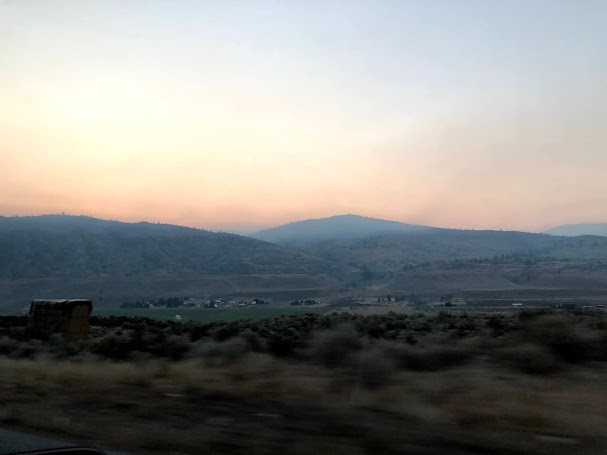 Talk about beating the heat...when I dropped Steve at Sweat Creek it was 46 degrees.  This is what it looked like driving out of Omak. That haze is from the wildfires ~40 miles west of Omak in the Winthrop area. I wonder why it was named Sweat Creek, but this is all there is. Driving back toward Omak, it looked pretty smoky.  There are fires to the south and to the west. Any questions of whether we made the right decision about diverting our route were answered after we saw how much smoke and haze there was in Omak. Even looking back to the east, it was very hazy. Courtesy of our dear friend Hank Cramer, here are more detailed pictures of why we are altering our route! Hank lives in Winthrop, next to the fires and took these pics yesterday. Cedar Creek Fire from Hank's driveway Looking toward Mazama and the Cub Creek Fire from a road in Winthrop.  Level 3 evacuation means Get Out, NOW! This one is for Bud, who is fascinated with abandoned structures. After his ride Steve spent the
Post a Comment
Read more
More posts